Our little monkey is 6 months old today! I can’t hardly believe it. Time is just flying by!

Preston is such a big boy these days.

He loves sitting up while he plays with his toys! ..and he’s obsessed with balls. He can even hold two at a time! 🙂 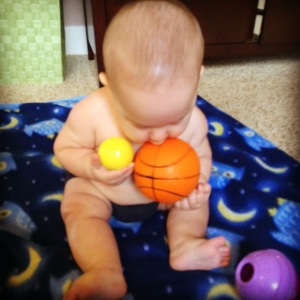 Well, actually, now that he is so good at sitting up, he loves to do it ALL THE TIME!! 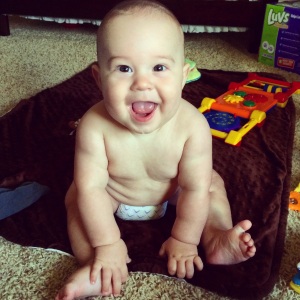 He has two teeth on the bottom of his mouth!

He LOVES eating sweet potatoes. I’ve only been giving him solids once per day. I’m going to start doing it twice a day now.

He also likes to ‘try’ to feed himself. it’s pretty darn cute!

When we go shopping these days, he prefers for me to wear him, rather than riding in the stroller! {can ya blame him?!}

He loves to stand. {with help, of course!} 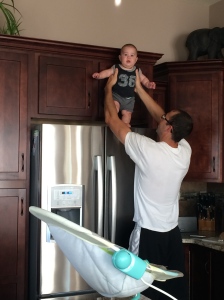 He absolutely LOVES his dog, Bentley!!

Dad still does a good job hanging out with Punky before he heads to work, that way I get a little ‘me time’ after his first feeding. 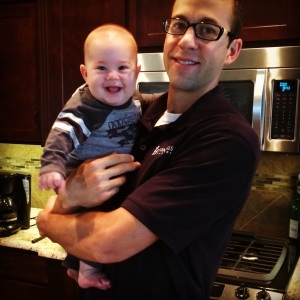 Preston WILL NOT take a bottle! But we’ve been practicing. 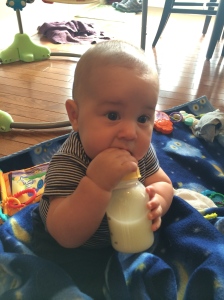 We just recently bought him an amber teething necklace. We’ve only had it for a week, but i think it’s helping!

He still enjoys bath time. {but i think he really just enjoys being naked! but don’t we all?! :P} 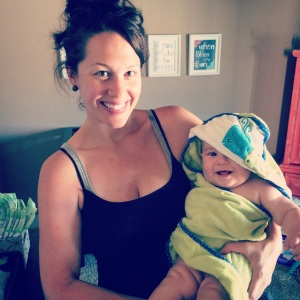 He also loves playing the piano with his hands. it’s part of our morning routine! 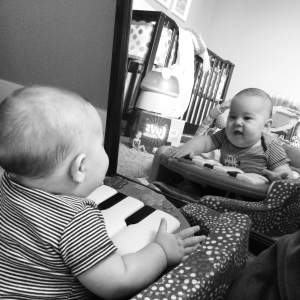 His legs keep getting chubbier!! ((don’t you just hate when your pants in caught in your leg rolls?! 😉 ))

Preston has been up to so many things lately. It’s crazy how much he’s developing and changing on a day to day basis. He loves to laugh and giggle. He is such a talker. He’s always talking and gibber gabbering to himself or whoever is around. He LOVES being held. He has had some teething pain. I hate when he’s in pain. I think the teething necklace is helping. Within the last 2 weeks, he has gotten up a few times at night from the pain. He doesn’t even wake up, just cries in his sleep. I always go in there and hold him until he stops crying. It usually doesn’t take very long though! Lately, he’s been getting scared easily. Loud noises, strange noises, me blowing my nose, anything startling. It makes me sad to see… But I know he’s just becoming more aware if his surroundings and developing a personality! A little snuggle and humming from Mom calms him down.

He also loves going to the nursery at the gym! They tell me that he’s the best baby and he’s one of their favorites!! 🙂 that’s always so great to hear!!!! i love my little pumpkin!!!

and he’s just cute as a little button!!!

It’s hard to believe how much our little Punky has changed! He weighs 20.2 lbs and is about 27 inches long! 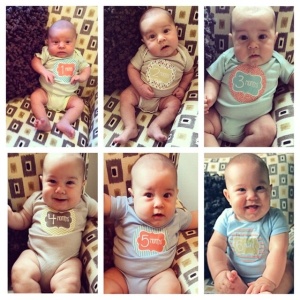 He’s always fascinated by the world around him!! {{contrary to what you might think, this picture was REALLY hard to capture}}