I can’t even believe that our little guy is 11 months old already! 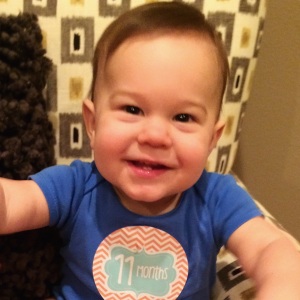 It is so crazy how much he changes on a daily basis. I swear he does something new every day, if not, twice a day! 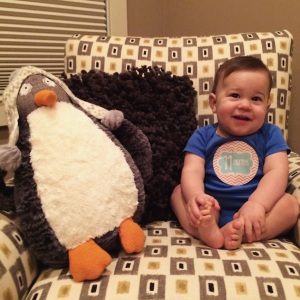 He has started using baby sign language. He can sign ‘more’ and ‘milk’. We are working on ‘eat’ and ‘all done’. He can wave, clap, and give high fives! We were watching Harry Potter and the Chamber of Secrets the other day, and at the end when they were clapping for Hagrid, I looked over and Preston was clapping with them! It was so cute. He can also stand on his own for a little while. He even took a 4 steps to me last week.

We were able to take a trip to Kansas for Chad’s birthday. We had so much fun staying with out friends, Jaimee, Pat, and Penelope. Penelope is a month younger than Preston. They had SO much fun together!

^^ scooter races!! It was fun watching them interact and give kisses!

Preston has been into everything lately!! Overtime I turn around there is another mess.

He loves digging his dirty clothes out of his hamper.

He loves playing in his clean clothes in the laundry basket. Which makes it really tricky for me to fold them and put them away.

He loves playing in the dishwasher!! The other day he actually loaded his spoon in there. it was so cute. He was SO proud!

He also has learned how to pull the drawer out with the garbage can in it…and he likes so crawl into the back and sit/play. I couldn’t find him one day, and then I heard a little squeal from the kitchen, I finally found him behind the garbage can! what a little stinker!!

If anything, this just helps me try to keep a more clean and organized house!! Sometimes it’s out of my control though. 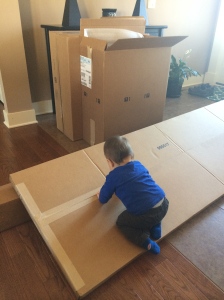 ^^ just playing on the new cupboards I got for Christmas! lol

Preston still loves eating. He will eat pretty much anything we offer him. We can’t hardly eat without him wanting 5 bites of food to our one bite! haha. His favorites are scrambled eggs, turkey, oatmeal, yogurt, bananas, grapes, kiwi, strawberries, and french onion soup! He weighs 22.8 lbs. He has slimmed down so much since he’s always on the go!!

^^he grabbed a red pepper and started munching on it in the grocery store! 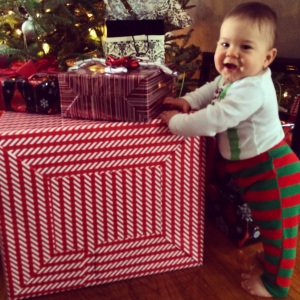 One gift that was really special, was for our reading nook. My mom found these signs at the flea market and made the middle one for us. My dad made the frames and had glass cut for each! I can’t wait to finished to get a cushion made–it’ll be perfect for little Punky!!

Preston has his first Dentist appointment!

The Dentist was very impressed at how well he did when she brushed and flossed his teeth. I bragged a little that I try to brushed them twice a day at home! 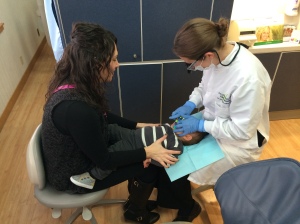 He also had his first eye appointment, sort of! I was at the eye doctor for my eye appointment and Chad and Preston came along. The eye doc asked if he could look at Preston’s eyes, for fun! He told us everything looked good and he was a little farsighted, like all babies that young.

Our little boy has such the personality. We love watching him grow and change. I can see little bits of a toddler inside him these days!! I just wish time would slow down a little. He is going to be walking in no time, I’m sure of it! He is such a sweetie with his hugs and kisses. He’s always ‘talking’. I can’t wait to finally understand what he’s trying to say. He does say ‘dog’ every morning. When he wakes up Chad goes to get him and brings him into our bed for a little while. Preston always tries to crawl over us to see Bentley (who sleeps on the floor on the other side of the bed) and as he’s making his way over there, he says ‘dog’ ‘dog’. It is soo cute!! He doesn’t quite have the ‘g’ sound down yet. But he’s getting there!!I can’t wait for them to be the best of buds! 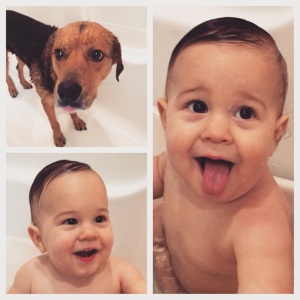 I finally got a DSLR to take some amazing photos of our little ball of joy. I can’t wait to teach myself how to use it! I’m so ready for some better quality photos of Preston. He is just changing everyday and I want to capture every second of it. I’ll leave you with one last photo from our DSLR. 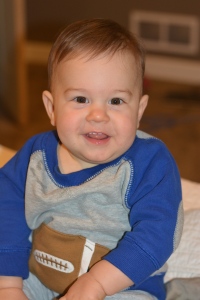 …until next time! xoxo ❤