I can’t believe another year has gone by! 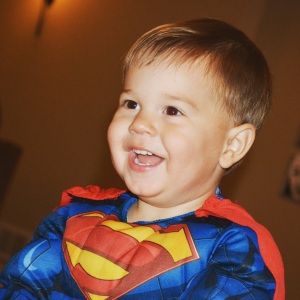 I did have a minor parenting fail though. On Thursday around 5pm I found out from my neighbor that trick-or-treating was going to be on Friday (instead of saturday the 31st) due to a home football game. I hadn’t gotten any candy, Preston’s halloween costume was 2 hours away (he was supposed to be buzz & woody with his cousin–they’re both obsessed!), and hubby was still gone on a business trip! I loaded Preston in the car and we headed to wal-mart for candy and a last minute costume. Thankfully, they had a costume in Preston’s size!! My 13 year old self was jumping for joy. I finally had a child to dress as my favorite childhood super hero/crush. So I grabbed the costume and candy and we decided to stop over at the mall quick before heading home. We went inside and everyone had their children dressed in costumes and all the stores in the mall were passing out candy! I couldn’t believe I had dropped the ball again!! With tears welling in my eyes, we ran out to the car, I threw on Preston’s superman costume, and we went back inside! I bought him a little bag at TJ Maxx to use for candy.

He was a little shy at first, I had to show him what to do. Walk up to the stranger, grab candy from them, stick it in your bag, tell them thank you, and move on to the next stranger. He caught on pretty quickly once he realized candy was involved!

I’m SO glad we stopped by the mall. It was so much fun! Preston had a blast!! It was the perfect warm-up for Friday nights shenanigans!

..and thankfully Dada was home to join in on all the fun this time!

Superpunky finished all of his chores just in time for trick-or-treating to start!

Even superhero’s have chores.

We hung out outside and Preston was able to pass out candy to all the kids!

After the rush was over on our block, we took Preston to a few houses around our neighborhood! Thankfully he remembered what to do. 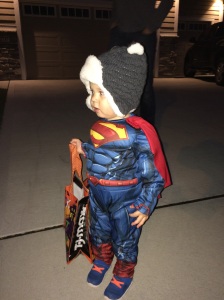 It was so great. Last year he was too young to enjoy the fun. This year he was the perfect age! He was so cute knocking on the neighbors door and then peeking his head to look in the windows next to the door. 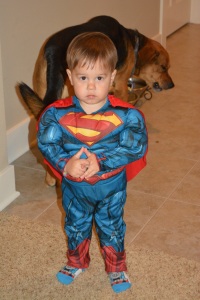 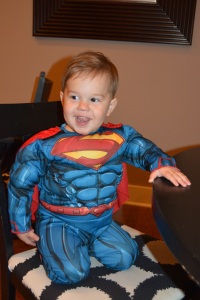 It’s crazy what a difference a year can make! 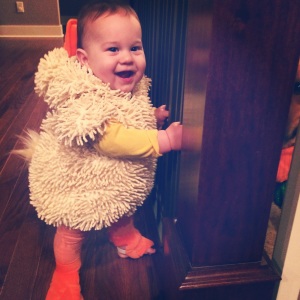 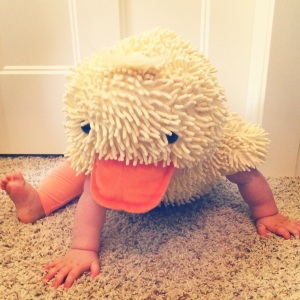 …until next time! xoxo 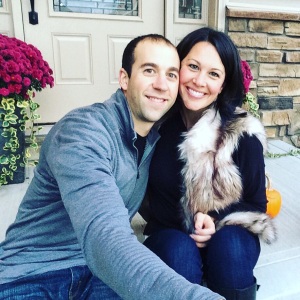 One thought on “Superpunky takes Halloween”