To say the last few months have been busy would be an understatement. It has been so crazy around here!! Chad has been traveling to Nebraska for work every week–so during the week it’s just been Preston and me. Every weekend seems packed full as well! 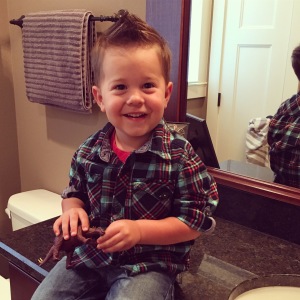 I’ve been watching our cute little neighbor boy 3 days a week. It’s definitely been great for Preston. He loves Joey so much and they have so much fun playing together. I love watching them interact. They do such a great job sharing and taking turns. I’m hoping this will prepare Preston for being a big brother, too!

Little Preston is such a ham! He reminds me of when I was young. Looks and silly-ness!

I think Chads traveling has been wearing on me. Not because Preston is a handful, he’s absolutely not! He’s actually SO very good for me 95% of the time. My sweet boy. But it’s all the other things that come up while your husband is away. 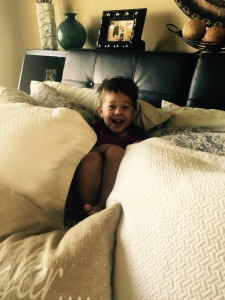 For example: a few nights (mornings?) ago at 5am the smoke detector in our bedroom went off and continued to go off every 30 minutes. At first I thought it was from the humidifier in our room (i was also battling a horrible head cold), I drug a barstool in from the kitchen and I had to balance this 25 week prego  body on a high barstool to get the button pushed for temporary silence. (The bad thing about high 14′ ceilings). The alarms were going off and it eventually woke Preston up, (of course, chad was gone), I was so frustrated, tired, and sick (and pregnant) so I started crying and Preston crawled on my lap and gave me a huge hug and said ‘it’s okay, mama’. He’s just too sweet!! I finally got the ladder hauled inside from the garage (a huge heavy metal/steel? one) to change the batteries (Chad had to talk me through putting the latter up while i sobbed uncontrollably over the phone) but as soon as I unhooked the smoke detector and the alarm went off Preston goes ‘yay!! You did it Mommy!!’. He’s my little cheerleader for sure. Later, Chad was talking to Preston about it on the phone, Chad asked Preston about it and he said ‘it woke me up in my crib and scared me. I cried in my crib. Mommy was sad and crying. Had to change batteries’. Gosh he is just so cute. I seriously can’t get over how sweet and cute my little boy is!! The funny thing is that they went off again this morning! OMG (chad’s gone) it really was my humidifier (just getting over my week long sickness). At least this time I knew exactly what needed to be done. (the darn ladder below)

We’re trying to get our house ready to put on the market as well. So I’ve been over working myself trying to scrub our walls, trim, and floors. I’ve organized the inside of all of our closets and under the sinks. Lets just say by about 3pm I can no longer move! It’s been killing my back for sure! I’ve been making many trips to the Salvation Army and lifting things I probably shouldn’t be lifting. My mind won’t stop running about everything that needs to happen before December when Pip2 will be here. I’m just praying we can sell our house and won’t be living out of a hotel with a toddler and a newborn. 😮 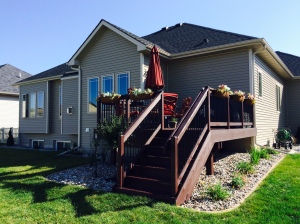 Preston has been his cute little self lately. He is so into learning it’s crazy! I’ve read a few things about teaching children (for example, teaching them to identify letters rather than just memorizing the alphabet and teaching kids to actually count during that time, rather than memorizing to count to 10.) Well, Preston has known to identify the letters in the alphabet since he was a little over 18 months. Lately, I’ve really noticed that he’s knows how to count, too! Which is great, because I’ve felt like a slacker Mom lately. The other day we were driving by wal-mart and they are doing construction outside to build a new bigger one. Preston said, “Mommy, I saw 3 diggers, 2 bulldozers, and 1 semi at the construction site’. After that he told me 1 digger was red, 1 was orange, and 1 was yellow. Once we got home he told me we got to go over 3 railroad tracks, too! (which was true, we went over 3 sets of tracks on our drive to and from our CSA–took a different route on the ride home).

Last night I let Preston stay up until 8:30 (past his bedtime) because he was so focused on reviewing his letters of the alphabet! He kept going through all of them telling me what they were. This morning Preston woke up and wanted to learn about money. So I got out some quarters, pennies, dimes, and nickels. He knows what a penny is and a dime. Still working on quarters (or quarts, as preston would say) and nickels. 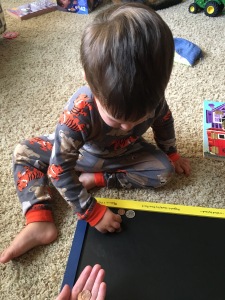 I had my Glucose test at my prenatal appointment last week. I passed, YAY! Pip2’s heart rate was 140’s. Can’t wait to meet this little guy, but glad to keep him in and cooking for the next 3 months!

Tomorrow the hubby and I will celebrate our 4th anniversary. We are hoping to hit up an apple orchard/pumpkin patch and then have a babysitter arranged for a date night! Time has flown by, but I can honestly say, this has been the best time of my life! Four years in and I still feel like this marriage thing is…don’t hate me…but it’s easy. Chad and I get along, we agree on things 98% of the time, we share parenting styles and views on spending vs. saving, we have our own likes and interests, yet enjoy hanging out together and as a family. It’s been a crazy fun adventure and I can’t wait to see what the next year will bring!

Today Preston and I did some painting (handprint/footprint art) to make a card and picture for Chad and the little stinker spilled the beans to him on the phone today. “i made a lion with my feetprint. Card for daddy” “mommy painted my hand. Made a fish”

Every night before bed, I sing to Preston. His favorite is the Itsy Bitsy Spider. But I LOVE hearing him sing Twinkle Twinkle Little Star (or Tinkle Tinkle Yee-ole Star). Preston is so cute that he can’t say his L’s very well.

Yesterday my uncle John passed away. It was very unexpected. He was always such a joy to be around! My favorite memories of him are from the houseboat we used to rent every summer growing up! His funeral will be next week in my hometown. Hug your loved ones a little tighter tonight!! ❤

Enough of my rambling. Time to fold laundry! Hubby will be home tonight, thankfully! I hope everyone has a great weekend.